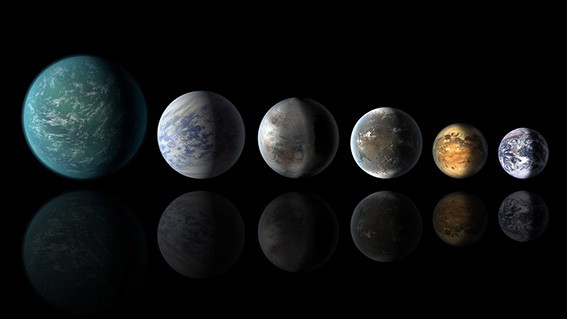 Developments in artificial intelligence may help us to predict the probability of life on other planets, according to researchers at the University of Plymouth.

From that, it estimates the probability of life in each case, with the obvious potential to play a key role in future interstellar exploration missions.

Mr Bishop, who is also a Lecturer in Radio and Telecomms at the Britannia Royal Naval College in Dartmouth, will be giving a presentation about the work at the European Week of Astronomy and Space Science (EWASS) in Liverpool.

Artificial neural networks are systems that attempt to replicate the way the human brain learns. They are one of the main tools used in machine learning, and are particularly good at identifying patterns that are too complex for a biological brain to process.

The researchers, based in the Centre for Robotics and Neural Systems, have trained their network to classify planets, based on whether they are most like the present-day Earth, the early Earth, Mars, Venus or Saturn’s moon Titan.

All five of these objects are rocky bodies known to have atmospheres, and are among the most potentially habitable objects in our Solar System.

They now plan for it to form the basis of a robotic interstellar probe that could prioritise its exploratory objectives by scanning exoplanet systems for potential signs of life.

Mr Bishop said:“At the moment, this project is all about investigating the feasibility of the idea. But we believe artificial intelligence would play a key role as such a probe would be out of range of any effective human contact and would need to make decisions on its own. We’re also looking at the use of large area, deployable, planar Fresnel antennae to get data back to Earth from an interstellar probe at large distances. This would be needed if the technology is used in robotic spacecraft in the future.”

Mr Bishop has already worked with NASA’s Goddard Spacecraft Centre to produce simulated data based on observations acquired by both ground-based and orbiting observatories.

These atmospheric observations of the five Solar System bodies – known as spectra – are presented as inputs to the network, which is then asked to classify them in terms of the planetary type.

As life is currently known only to exist on Earth, the classification uses a ‘probability of life’ metric based on the relatively well-understood atmospheric and orbital properties of the five target types.

“Given the results so far, this method may prove to be extremely useful for categorising different types of exoplanets using results from ground–based and near Earth observatories,” says Professor Cangelosi, whose extensive existing work has included research with both the European Space Agency and NASA.

The technique may also be ideally suited to selecting targets for future observations, given the increase in spectral detail expected from upcoming space missions such ESA’s Ariel Space Mission and NASA’s James Webb Space Telescope.